Warning – this is a long post with the occasional rant but also practical suggestions.

This is probably the trickiest of all posts to write. The ethical issues are arguably more complex than the environmental ones due to social and economic inequality, globalisation, the legacy of colonialism, gender politics… Moreover, I am aware that I am writing from a privileged position: I am comfortable enough to have options. Here are my thoughts nevertheless.

The mantra “fewer garments, better quality” has been key in my wardrobe challenge. Similarly, repair, re-making and making my own have given me more control over the credentials of my clothes. These approaches, however, meet with two common criticisms.

Ignoring the whims of fashion, maintaining and repairing what we already own and buying fewer items costs nothing more than a few pounds for needle and thread. Of course, clothes do wear out and at some point need replacing. Also, we are social creatures so it is normal to want to look good or indulge in occasional frivolities. There is nothing wrong with any of that but clothes do cost.

A responsible supply chain means more expensive garment, not because the premium for socially and environmentally kinder clothes is unduly large but because most clothes are “artificially” cheap. Goods (including food and clothes) that do not account for the environmental and social harm they cause are cheap because the producer and consumer do not (directly) bear the cost of the impact on health, environment, society… Recalibrating our concept of “cheap clothes” is therefore an essential part building a more sustainable wardrobe.

Many people, however, genuinely live in straightened circumstances and have little choice but to buy cheap clothes from second hand shops or fast-fashion megaliths that make clothes of disposable quality. It’s patronising to suggest that those living on a tight budget don’t know or care about the impact of their clothes. Generally they just have less choice over the products they buy, and less scope to effect change. Any effort to achieve sustainability in the clothing (or any other) industry should therefore also involve campaigning for a living wage for all, at home and abroad, so everybody has the energy and security to live according to their values as well as feed, clothe and house themselves.

Responsible on a budget

Conscious of the relevance of money I not only chose to live on wartime clothes rationing for three years, I also set myself a budget informed by the Minimum Income Standards (published by the Joseph Rowntree Foundation). My annual wardrobe allowance was based on the MIS’ clothing budget plus an optional 5% of the “social and cultural participation” budget. I felt the latter was appropriate as knitting is a key leisure activity for me the way the pub, football or Netflix might be for others. In practice this meant a wardrobe budget of:

In 2013 and 2014 I was well within the budget and last year fractionally over it as my stock of clothes dwindled.

I am aware that the MIS is below the UK minimum wage and that my clothing expenditure probably exceeded what many people spend. However, as the MIS is the basis for calculating a voluntary UK Living Wage, which has already been adopted by many employers and organisations, I believe it is standard we should be aiming for and therefore considered it an appropriate guide.

“If we stop buying, the economic system will collapse”

This criticism is often accompanied by the argument that sweatshops may not be ideal but provide an income for workers in developing countries. The unquestioned acceptance of such arguments, however, baffles me.

People intuitively understand that there is something wrong with the fast fashion model but seem to default to a “better the devil we know” position. When we encounter a problem with our health, children’s schooling or job, our instinct is to question and explore different approaches, change diets, tweak a process… Surely we could do the same with our wardrobes (as we have started to do with our food)!

Over the last three years I’ve realised how much power we actually have. Here are just a few ideas of what we can do to influence the clothing industry (or any other one for that matter)? 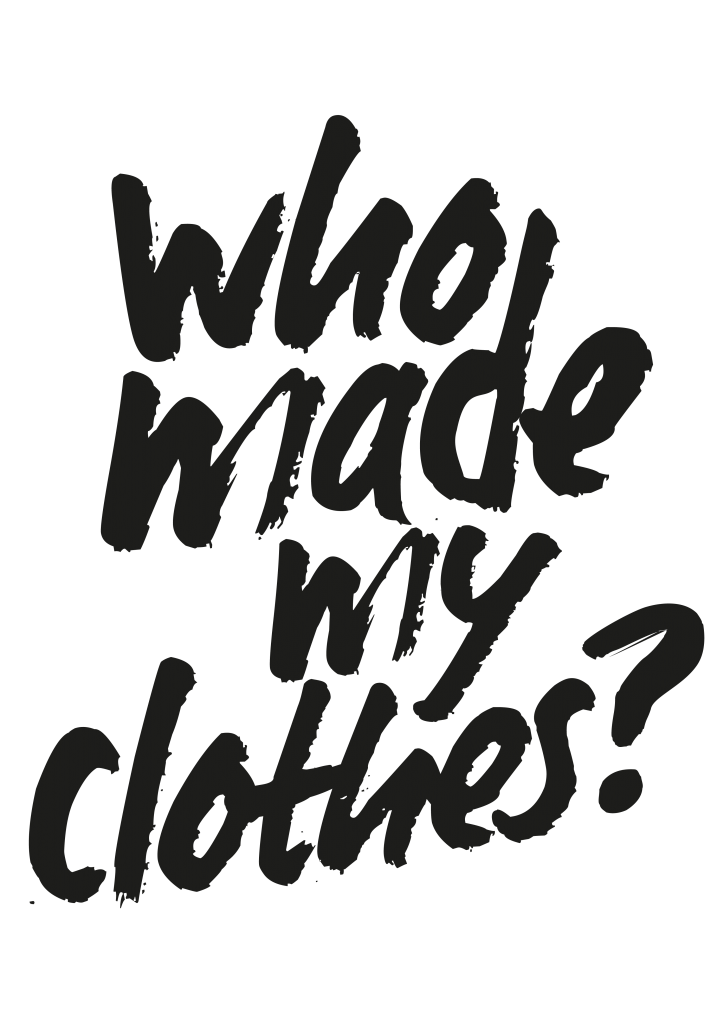 Fashion Revolution* encourages us all to ask this question

Achieving change, whether personal or systemic, takes time, effort and money. And when there are bills to pay, mouths to feed and laundry to deal with it can feel overwhelming (even without having to juggle the wardrobe needs of growing children). The key though is to start with something, whether it is a go-to pair of trousers or a frivolous party frock, and build on it. When I started on my journey to a sustainable wardrobe, I aimed for at least one outfit that was responsibly sourced. Several years on, the ethical and environmental credentials of my bras and running shoes are still less than perfect. I don’t beat myself up though as my wardrobe is more responsible than it was. More importantly, my default is to seek out ways that not only achieve the look I want but have as much positive social impact as is feasible with my modest consumption and investments.

* All images courtesy of Fashion Revolution. This organisation is aiming to build momentum around the social and environmental impacts of our clothes and encourages us all to be fashion revolutionaries.