Last week the Imperial War Museum in London launched Fashion on the Ration: 1940s Street Style. As I have been living with self-imposed clothes rationing for the past three years, I was obviously interested in this new exhibition and jumped at the chance to attend the preview as well as a private tour with the curator.*

From the press release I knew the exhibition would focus on more than rationing, Make Do and Mend and the Utility Clothing Scheme (i.e. a set of prescriptive rules aimed at keeping labour and materials to a minimum). It would cover the sudden and very visible shift of a nation into uniform and a move to more practical clothes as people adapted to the realities of the war, as well as the concept of beauty as duty.

It is easy to think that wartime clothes would be dull. As many men were conscripted, women had to take their place in factories and offices and on farms. Functional clothing therefore became the order of the day: overalls, sweaters, headscarves… With public transport often interrupted or commandeered by the forces, shoes and garments had to be practical and durable as the nation walked or cycled everywhere. And then there were the air raids. What would you pull on if you had to dash down to the shelter in the middle of the night? Add to that rationing to eke out scarce resources and ensure everybody had enough. It hardly sounds like a recipe for a nice wardrobe.

The practicalities and necessities of war may have changed what people wore and how much they could buy, but the curators were eager to show that creativity and fashion persisted during the long war years.

The exhibition naturally explores individuals’ ingenuity in turning scavenged fabric, scraps of material and limited yarn into clothes, e.g. a child’s cape fashioned from a blanket, a patchwork housecoat and colourful knitted accessories. It also showed there was still a place for frivolity, with offcuts of silk turned into a bra or jewellery fashioned from factory scraps. This resourcefulness is delightfully illustrated by Eileen Gray’s letters (complete with pen sketches), in which she describes to her husband how she manages to keep herself and her children looking smart despite the shortages. 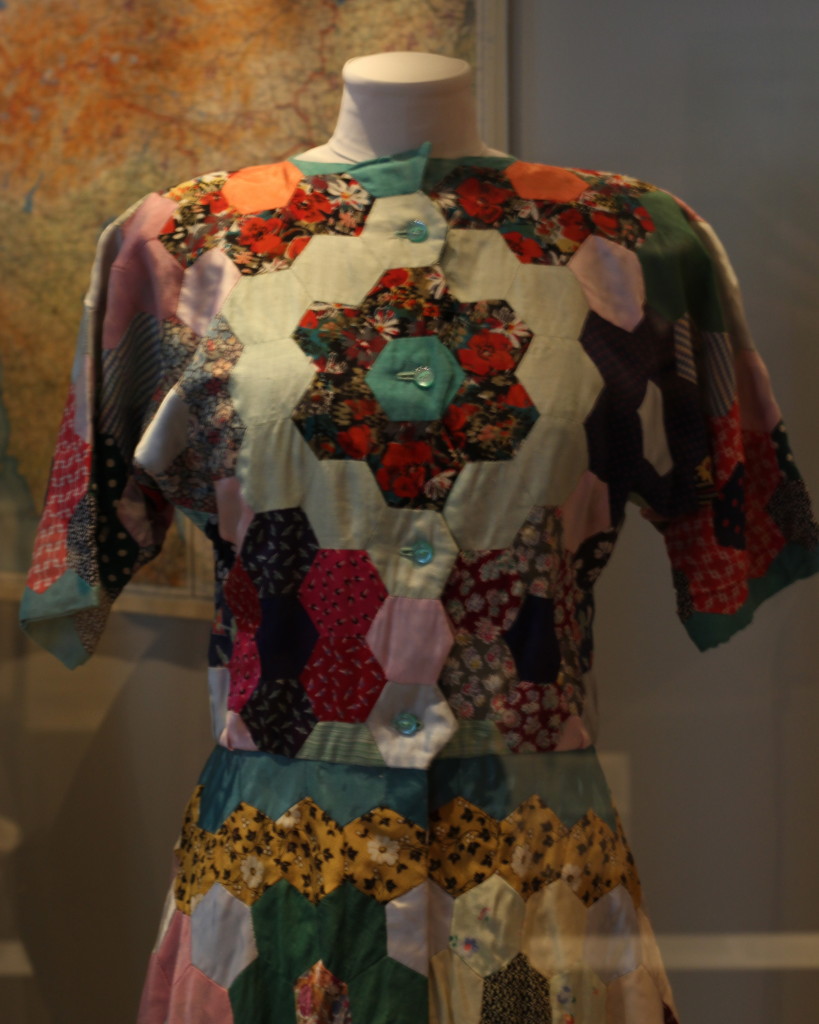 A colourful housecoat from scraps of fabric

Creativity was, however, not the preserve of individuals. Retailers and designers also rose to the challenge. Coupons may have curtailed people’s “purchasing power” and restrictions on the number of pleats, pockets and buttons may have ruled out extravagant styles and cuts, but brands still went to great lengths to produce stylish ranges in attractive colours (for women and children at least). And their efforts were motivated by simple commercialism: the desire to induce customers to shop with them rather than a competitor. 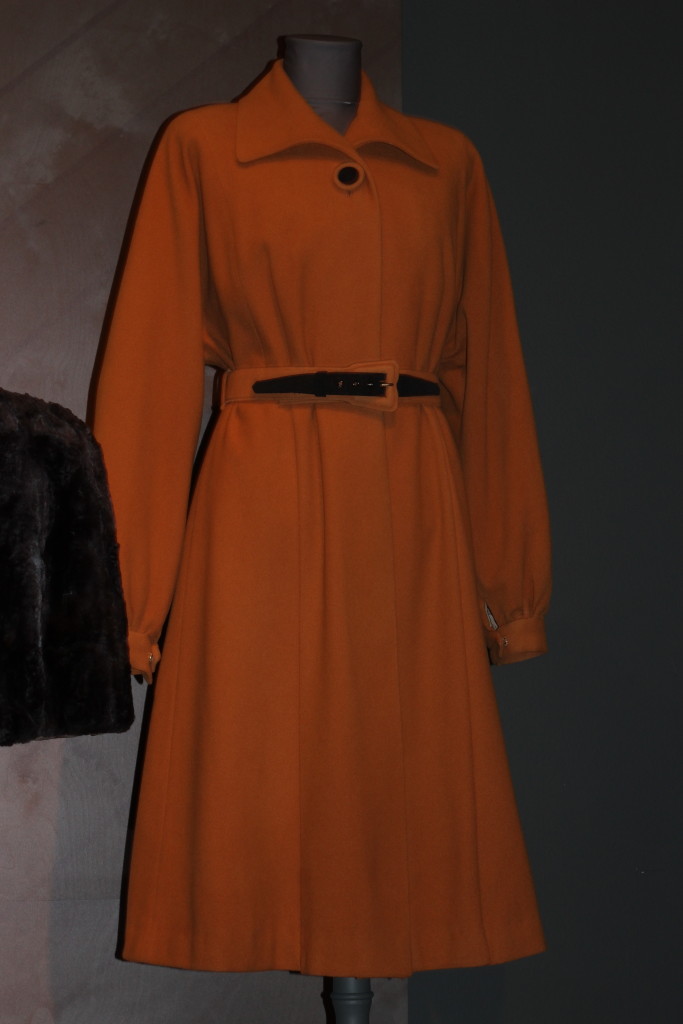 The commercial opportunism of the era was apparent from the new ranges of clothes and accessories, e.g. handbags spacious enough to hold a gas mask or glow-in-the-dark broaches and corsages to make walking home in the blackout a little less hazardous. Not to mention beautifully tailored siren suits that were far too attractive to be limited to nights down the air raid shelter! Despite design constraints and rationing, retailers still defined fashion; magazines and adverts still promoted the latest looks; and people still wanted to feel fashionable.

Siren suits: from a practical response to street chic

Fashion in a world of finite resources?

Regular readers of this blog may have noticed that I rarely utter the word “fashion”, let alone “sustainable fashion”. My tour around the new Imperial War Museum exhibition certainly made me think more about the term.

The Oxford English Dictionary definition of “fashion” includes “the production and marketing of new styles of clothing and cosmetics”. This continuous, active creation and marketing of new trends, which render previous ones undesirable, goes to the heart of my issues with “fashion”. In an age when the British government curtailed production and consumption, fashion may have been a fun, harmless indulgence. In a society where retailers bring out new fashion lines every few weeks and debt allows us to indulge our every whim, it is a very different matter!

The clothing industry, from fibre production through to manufacturing, is incredibly resource-intensive. Whilst the use of certain fibres and production processes can reduce the industry’s chemical, water, carbon… footprint, this is just tinkering around the edges if the clothing industry continues to drive ever-greater consumption through an endless cycle of short-lived trends.

Although my own restraint is inspired by clothes rationing (and I would probably support legislation and/or taxation to curb the excesses of the fashion industry), I am realistic enough to know that wartime approaches won’t provide the whole answer. The apparel industry and its supply chains mean employment for a lot of people, often underpaid and dangerous, but a semblance of a living nonetheless. When the British wartime government restricted clothes production to save labour, employees were deployed elsewhere to serve the war effort. This meant the government was often the customer, which ultimately bankrupted the country. Hardly a good model for change!

The challenge facing governments that are serious about “sustainability” is how to slow the cycle of consumption (whether of clothes or other goods) whilst still securing jobs, livelihoods and sufficient tax revenue to ensure a decent level of wellbeing? As highly talented academics and economists are struggling with this dilemma, I won’t pretend to know the answer. However, if rationing has taught me anything, it’s that most of us can recognise value and support real jobs in our daily choices, and that, like our wartime peers, we can be incredibly inventive. If we collectively direct a fraction of our creativity at exploring new economic models, rather than trying to maintain business as usual, we might be happier… and probably better dressed too.

* I am extremely grateful to the editor of Pretty Nostalgic for offering me the opportunity to attend the press preview of Fashion on the Ration: 1940s Street Style and for arranging a private tour with the curator Laura Clouting. I should also like to thank Laura for her time and the interesting background information she provided.

Fashion on the Ration: 1940s Street Style is on at the Imperial War Museum in London and runs until 31 August 2015. Tickets are priced at £10 for adults, £5 for children and £7 for concessions.