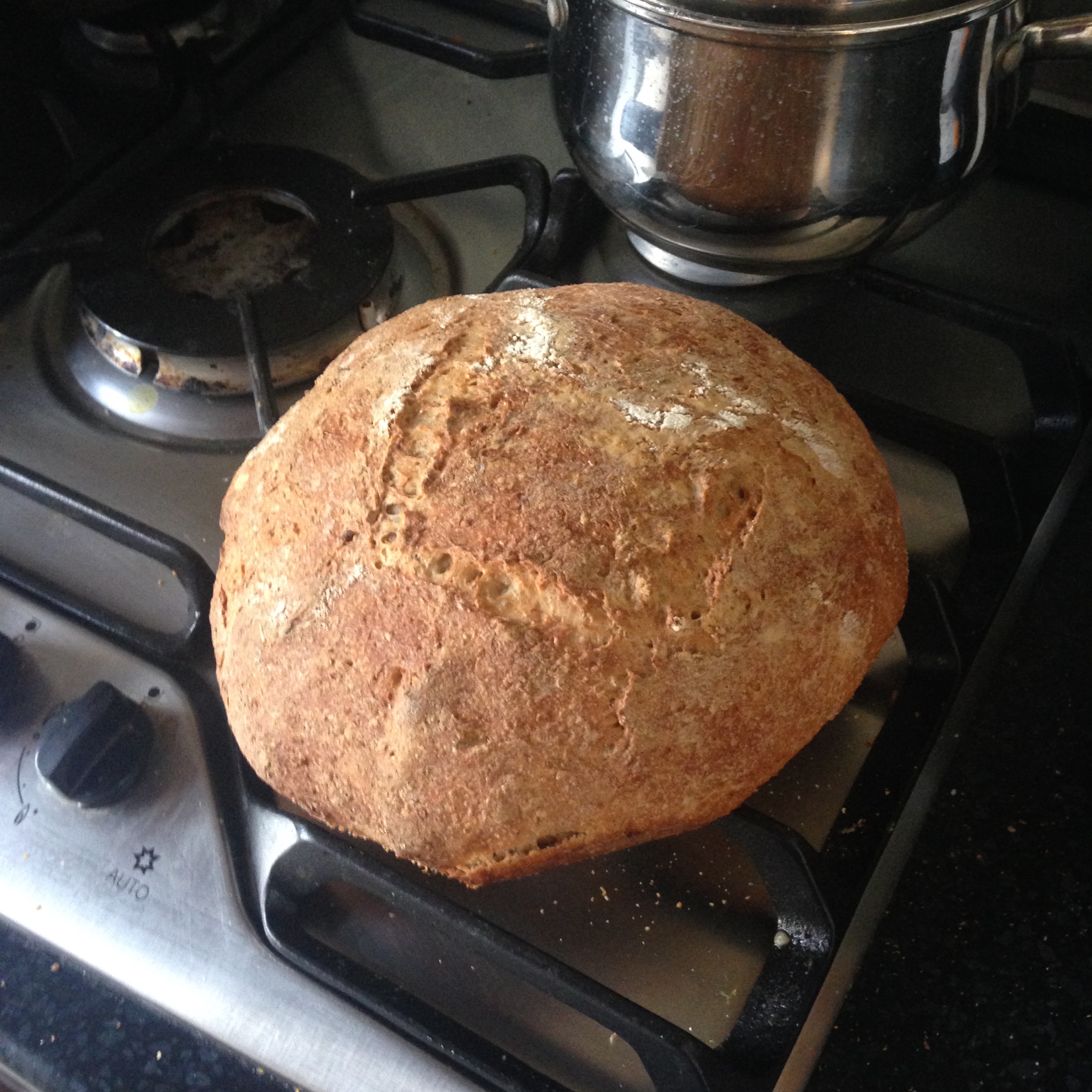 I know gluten and wheat are demonised in many quarters these days but I love bread. Real bread. Chewy and full of flavour. And especially sourdough bread. Unfortunately many people are put off making this, not least of all because some cookery writers create such a mystique around our collective heritage. Biologically speaking sourdough is amazing, but baking sourdough bread is a process we can all master.

I have been making sourdough bread for numerous years now; I have used a variety of recipes and have consulted even more; and I can let you into a couple of secrets.

First, sourdough bread is the original leavened bread. It dates back millennia, before a time of Google, cookery books and special equipment. It was a skill most women had in their armoury, and I doubt they agonised about producing the perfect loaf.

The second secret is there is no need to worry about perfection as no two sourdough breads will be the same. When you work with live cultures, there is no uniformity of batches. There is consistently nutritious and tasty but no identical products!

I regularly hear that making bread, particularly sourdough bread, is time-consuming and complicated.

Sourdough bread is slow bread. As it takes time for the leaven to do its work, some planning is needed but actual hands-on time can be as little as ten to 15 minutes. Add to that a few minutes over the course of a week to make the starter, and a couple of minutes per day to feed it.

Is making these ancient loaves complicated or involved? It really depends on the recipe.

When I started making sourdough bread, I followed Dan Lepard’s instructions in The Handmade Loaf. It made very tasty bread. The book is a super read, with lots of good recipes for all manner of loaves. However, I find his method a bit of a palaver as it means staying close to the kitchen all day and watching the clock, something I doubt our ancestors had the time for. Fortunately, there are many other approaches that are much simpler, like this sponge-based recipe, or a no-knead approach.

A word about the starter

As with loaves, some writers seem to overcomplicate starters. Some suggest adding live yoghurt or raisins to speed up the process, usually because they recommend making it in a sealed container. Going back to our forbears, they discovered that flour and water, left out in a warm space, captures natural yeast present in the air, which starts a fermentation process.

Fermenting means the live enzymes start to break down starches in the flour. With time and regular feeding the starter becomes a balanced culture where lactic acid bacteria and yeast live in a symbiotic relationship (i.e. they work together and support each other). Some people worry at the mention of enzymes or bacteria but fermentation is not an unclean or unhealthy process. In fact, it kills off bad bacteria. After all, it is part of brewing beer, which was originally done to ensure water was safe to drink, or yoghurt making, which is a way of preserving milk.

The second thing to remember is that, in many cases, the taste and texture of a sourdough loaf depends on how lively the starter is. For thorough but no-fuss instructions on making a starter and feeding this magical mixture, check out @zerowastechef’s recipe. 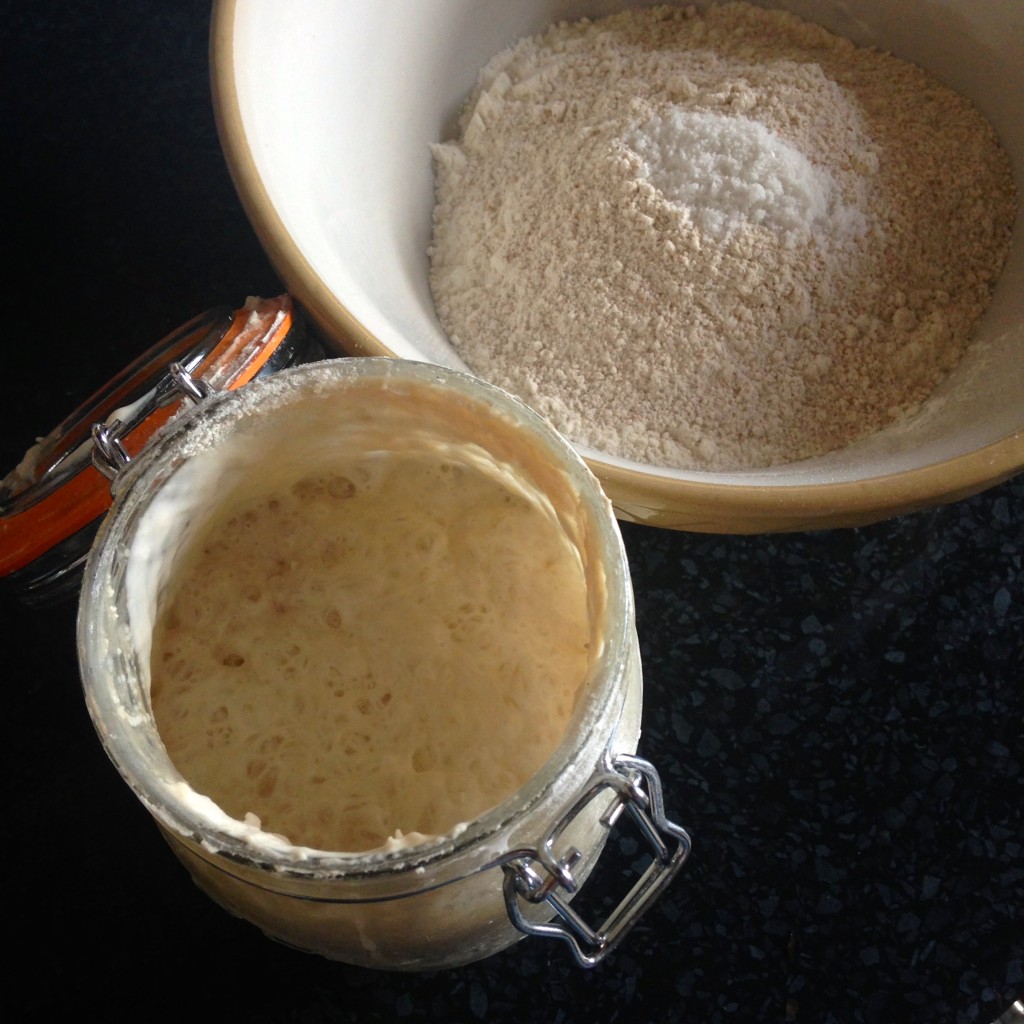 Queen Maud, about to work her magic on the flour

I usually follow a no-knead recipe, not due to idleness on my part but due to arthritic hands. There are many no-knead recipes available on the Internet. I prefer this simple one from Shipton Mill.

Before starting, I make sure Queen Maud – as I affectionally call my leaven – is particularly perky. This means feeding her for two or three days if she’s a little deflated.

For the dough I use a mix of organic flours, usually plain and wholegrain spelt. I generally find that any home-made bread is tastier than mass-produced bread, but if you can afford and find a quality organic flour, it enhances the flavour even more.

As to timings, I usually make the dough first thing in the morning so the culture can do its work during the day. I cover it with a moist, slightly floured tea towel instead of plastic. I then fold and shape the loaf in late afternoon or early evening and bake it three or four hours later. And there is no need to worry about the loaf not being fresh for breakfast as sourdough bread does not dry out the way yeasted loaves do.

These days there seems to be a big emphasis on equipment. Whilst our ancestors probably used a basket and a stone, I have neither. Instead, I make do with a bowl for the long prove and whatever I bake it in or on for the shorter one. Depending on the dough’s consistency, I might use a baking sheet or a large baking tin with removable base. The latter may seem like an odd choice but some recipes suggest baking the loaf in a cast iron pot, which my hands would struggle to lift, so a baking tin seems a reasonable alternative. Whatever I use, I make sure I dust it with plenty of flour first.

The beauty about sourdough bread, apart from its flavour and chewiness, is that it is actually as a very forgiving process. (I am not sure recipe is right word for this type of baking.) If you nurture a lively sourdough starter and don’t rush the process, it really doesn’t matter whether you have a lot of baking experience, specialist flours, fancy equipment… or not.

Is sourdough an artisan bread?

I am not a fan of the term artisan bread, or rather the label. In my mind, all real bread, made on a small scale by somebody who cares about the ingredients and results, is artisan bread. Of course, these days the term is used to distinguish traditional-style loaves from mass-produced ones, and to justify a higher price tag too. I don’t mind that people are willing to pay these prices rather than make the bread themselves. What annoys me is that real food needs to use labels to distinguish itself from industrialised fodder, just as fossil-fuel intensive farming masquerades as “conventional” farming whilst real, traditional farming has the extra burden of the term “organic” and all the certification this involves. I therefore prefer to talk about real bread, real food, real farming…

If you are interested in learning more about sourdough starters, and fermentation in general, check out @zerowastechef’s workshops and free webinars. I’ve already attended a couple of her webinars, and enjoyed picking her brains! I now fancy the sessions on fermented whole vegetables and tomatoes.