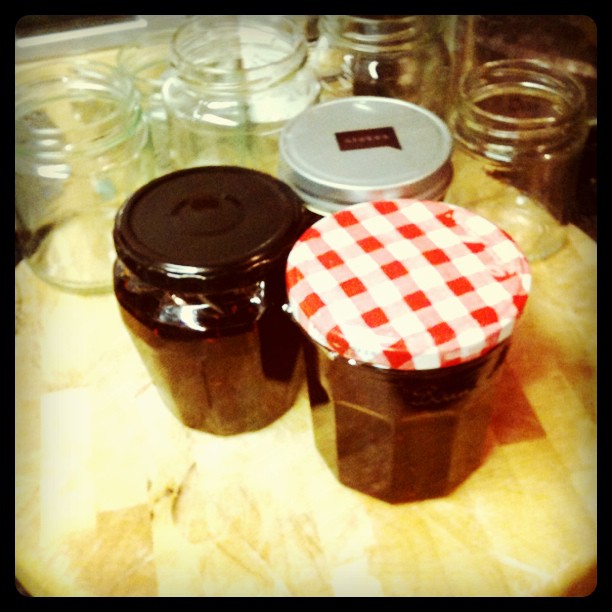 In my street there is a scrap of overgrown waste land that I have been watching for weeks. Or rather, I have been lovingly nurturing it with my eyes and willing it on. And the long-awaited moment finally arrived last weekend!

The scrubby patch of brambles – all wandering branches and vicious thorns – started to blossom in May. The abundance of delicate pink flowers promised the birds and patient souls a bountiful crop some day and I have been monitoring the plants ever since. I watched the little petals wither and before long little green fruits appeared. By the end of the month, as I left for a holiday in Greece, they were everywhere: tightly packed clustered berries that with time, water and lots of sun would grow plump and juicy and turn a deep shade of black. By the time I returned from holiday the green berries had doubled in size and had started to fade cautiously into red, unhurried as if they had all the time in the world. And in the last couple of weeks the reddest ones developed into a deep inky colour, not dissimilar to my favourite J. Herbin fountain pen ink, Moon Dust.

A fortnight ago Mr M and I tentatively tried one berry each and concluded that they needed another ten days. So on Saturday the moment had come.

We set out with a colander, gloves and three wire coat hangers. Neighbours stared in surprise as we bent and stretched to reach the black fruit, starting with the ones nearest to the front. The trusses of brambles further up and back were more tricky but we had a cunning plan! We pulled the wire coat hangers like an archer’s bow that would not snap until the coat hangers were long hooks with which we could lift stubborn branches out of the mass of undergrowth. Then we twisted the flattened wire hangers around railings and stronger branches to hold the meandering side branches back long enough to pick the ripe fruit, before gently releasing them so the remaining red berries could grow on unhindered. After an hour we returned home with a colander full of gorgeous fruit and fingers stained blue with the evidence of our morning labours.

That evening, I boiled the brambles with sugar (a little less sugar than the weight of the fruit) in a heavy based pan. With a pound and a half of fruit it was not quite jam-making on the “industrial scale” of my mother, but watching the rolling boiling motion of the jam and smelling the intoxicating scent of brambles and sugar fill our small kitchen was very satisfying nonetheless. The frozen saucer test reassured me that despite the lack of added pectin my jam was setting. The efforts of the day resulted in three jars of bramble jam for the larder.

With more red berries in our local bramble patch as well as an abundance of bramble bushes on a forgotten path near the Heath there will be many more brambling mornings this summer, some late bramble jam and probably even an apple and bramble pie or two. But as these are the first preserves from our local foraging, Mr M has agreed to leave at least two jars for the winter so that in the long dark months we can smell the memory of summer when we lather up scones or crumpets.