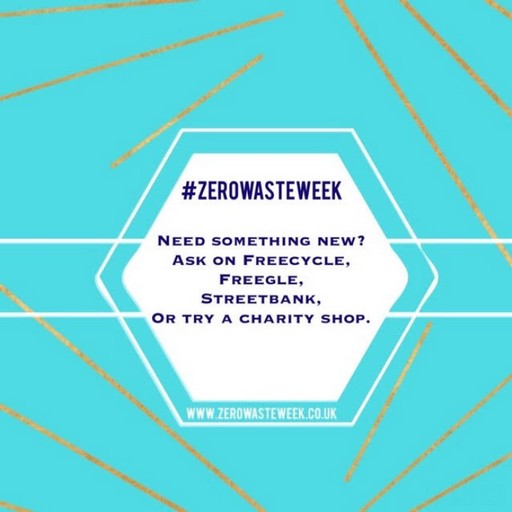 Zero Waste Week has finished for another year but although the flurry of activity and conversations have died down, the action, exchanges and reflections rumble on. I followed this year’s campaign with particular interest. On the one hand, I was one of thousands of people who were doing their bit and encouraging others to tackle pointless waste; on the other hand, I was watching and listening as an environmental researcher fascinated by behaviour change.

Just like last year I was amazed by individuals’ enthusiasm to tackle waste but also their commitment and sheer inventiveness. Yes, people were taking their own bags and containers to the shop to avoid packaging but they were also getting out thread, hammer and soldering iron to fix broken items. Some turned their hand to making laundry products and toothpaste to eradicate plastics (and obnoxious chemicals) from their home; others set to work on making homemade Christmas presents from items found around the house.

As comments, photos and suggestions appeared in my social media feed, the overriding impression was not: “what a bore this is” or even “how virtuous am I!” but rather curiosity about the possibilities and excitement about being creative, two things that chimed with my dissertation research and my own experience.

But Zero Waste Week is about more than just re-using household goods and eking out what we already have.

This year, more than last, I spotted blog posts and conversations about the bigger picture. About invisible waste around the home, like wasting water, electricity or heating; about waste upstream, mostly in the food industry; about planned obsolescence, an endless source of frustration; and about waste through inefficiency.

Once such conversations revolved around food. Somebody commented that meat consumption seemed contradictory to zero waste efforts, as livestock is very water and land intensive compared to grains and pulses. Not surprisingly, a passionate, sometimes blunt, debate ensued – such is the nature of much of online communications!

Although the tone needed to be diffused, to my mind, the exchange was actually a good sign. Such conversations mean people are exploring waste from different perspectives. What may have started as a campaign focussed on avoiding single-use plastic packaging and promoting recycling is growing and expanding into its name: zero waste is as much about resource efficiency as it is about rubbish avoidance. And hearing people explore it in those terms is very encouraging. It suggests that concepts are increasingly embedded in people’s thinking and starting to spill over into other areas of life!

Last week two snippets emerged from the political scene. First, Kerry McCarthy MP referenced Zero Waste Week at the Houses of Commons when she introduced a bill aimed at reducing food waste in the food industry. Secondly, an early day motion was proposed to celebrate Zero Waste Week, and its founder, for its efforts to encourage waste avoidance. Both the bill and the motion were proposed under quirky political procedures that mean they are unlikely to get the parliamentary time needed to progress, but they are significant nonetheless.

Campaigns and movements like Zero Waste Week, Love Food Hate Waste, Plastic Free July, Festival of Repair, Waste Less Live More… may call on individuals to cut their consumption and change their practices but they are not just about “me doing my bit”. They illustrate, often unintentionally, what we can achieve alone and what needs a critical mass. With time and effort they create an “us”. Not just “us doing our bit” but “us shaping a different social norm”. Such grassroots voices gather momentum and slowly seep into the consciousness of decision makers.

Five or ten years ago food waste was barely mentioned in public life or by the media. Now there is a growing sense that it is socially unacceptable. Increasingly governments and companies (“them”) are considering legislation or introducing experiments in their supply chains to reduce waste. Such changes do not spontaneously emerge from “them”. They are due to “us” shifting norms and demanding change. For example, next month a charge on plastic bags is finally being introduced in England, months and years after a similar measure came into force in Wales, Scotland and Northern Ireland.

In this age of busy schedules and information overload it is so easy to become jaded about campaigns and petitions. Barely a day goes by without one appearing in our Inbox or on a social media timeline. However, it’s worth remembering that shifting social norms and changing laws starts with small changes in our own life and in our communities!

If you are based in the UK and believe in zero waste, please sign the petition against the Government slashing subsidies for small solar power projects and email your MP to express your concern. The proposed changes are particular worrying as they will significantly reduce the viability of community solar energy projects.

What has solar energy to do with zero waste? Sunlight is a free resource and not harvesting it where possible seems wasteful. Furthermore, community solar energy projects are typically situated on the roofs of occupied buildings (housing, schools…). Occupants use the electricity generated, with the remaining being exported to the grid. Using electricity where it is generated makes a lot of sense because every time electricity is transported across the grid, transmission losses occur. More waste! And if that were not enough, as community energy projects are typically structured as social enterprises, a share of any profits from selling excess electricity is reinvested in the community.