On making a garden

If gardening magazines and shows are to be believed, gardens come in two forms: vast acres consisting of different rooms designed around various themes or beautifully clipped designs that go from blank canvas to splendour in the space of five months. The truth is somewhat different as any gardener knows. Gardens evolve with the years, the elements, our tastes, our knowledge…

I’m now in my sixth season of working “the grounds”. If I were starting out again with this space, I would probably do things a little differently but that insight is the product of five years of tending my tiny garden, experimenting, digesting the cycles and understanding how the garden impacts on me, my life and the household. As the growing season kicks off in earnest again, here’s a snapshot of some of the learning from my five seasons to date.

Despite the grand name, the grounds are actually tiny. About 20m2 and north easterly facing. As space and sunlight are at a premium there’s no room for a greenhouse. That’s not to say I don’t have a place for raising seeds and potting them on. I do. It’s called the living room windowsills.

As small space vegetable gardening involves intensive successional sowing, I quickly learnt that two yards of windowsill was not enough. For several years I popped occasional tables near the window, covered them with newspaper and moved pots round as something more deserving of space (i.e. smaller) joined the queue. The “system” sort of worked but was never pretty and invariably involved seedlings becoming disconnected from their label and peers.

This year, therefore, I opted for a more efficient solution: a temporary shelving unit that will hold multiple pots and trays and can be flat-packed away once the seedling season is over. Admittedly it’s not the most aesthetically appealing item and it clashes with the décor but this temporary fix compliments our values and priorities: real food, real flavours and a productive household. Also, it is much easier to keep clean than wood veneer! 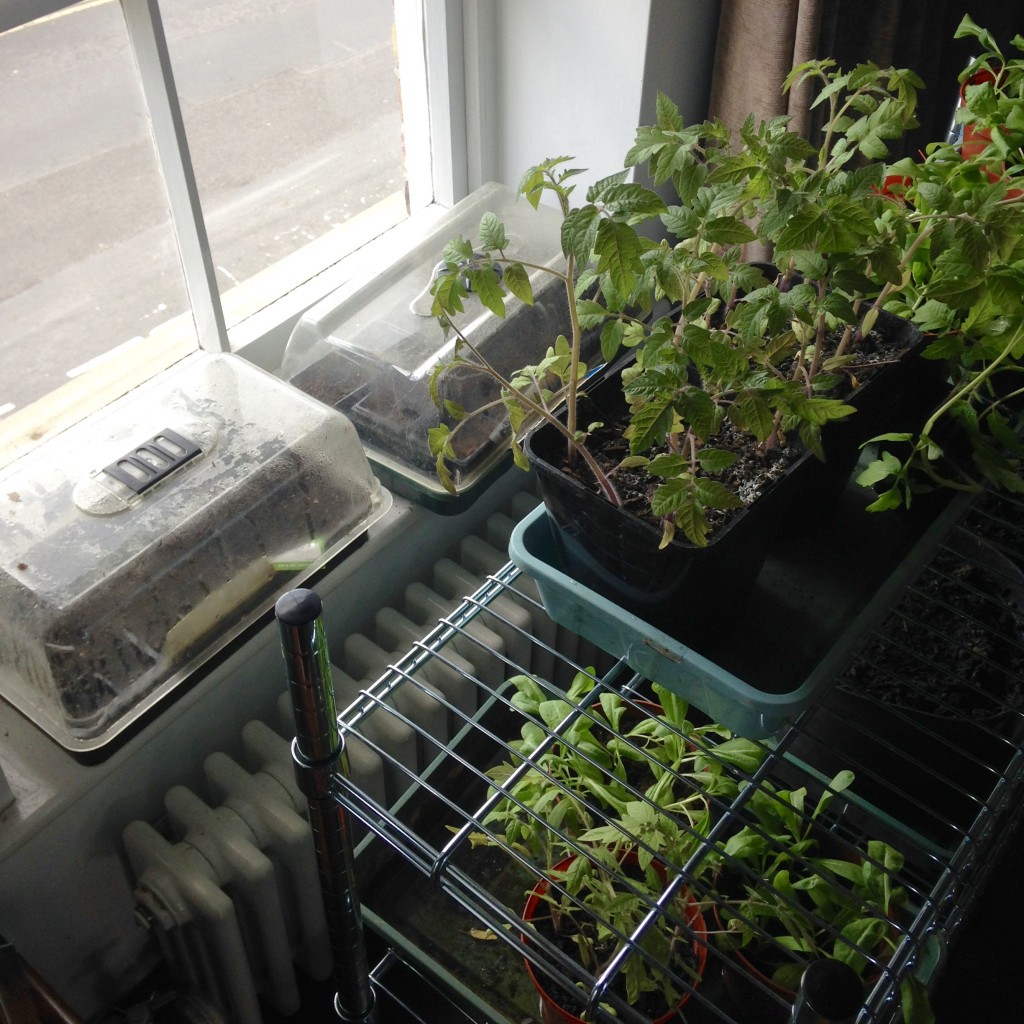 When gardens can’t accommodate a greenhouse, the living room becomes one

In my first two seasons I grew flowers for pest control and pollination: a few bulbs for spring cheer and forage and glorious Calendula, Escscholzia and Cosmos. With each year that has passed though I’ve realised that flowers, beauty and scent deserve a spot in the garden in their own right and the more I’ve allowed them in, the more beneficial wildlife I have attracted.

In year three I added an array of annuals. In year four I tried my hand at biennials, so last year I enjoyed a longer flowering season and more colour thanks to honesty, wallflowers and sweet williams.

To add texture and depth to the garden, this season I’m adding perennials. Last autumn I planted one side of the front herb garden with Helenium and Salvia, which are establishing themselves nicely, and I shall be popping some Rudbeckia in on the other side. In the back garden Verbena bonariensis, Echinops, perennial scabious and phlox are going into the only real bed. To make use of the verticals, I’ve invested in clematis to disguise the fence and am indulging my love of roses with a climbing version of the Meg rose – what else? – for the back wall. And for winter gorgeousness, I planted a couple of hellebores I’d received as a gift. 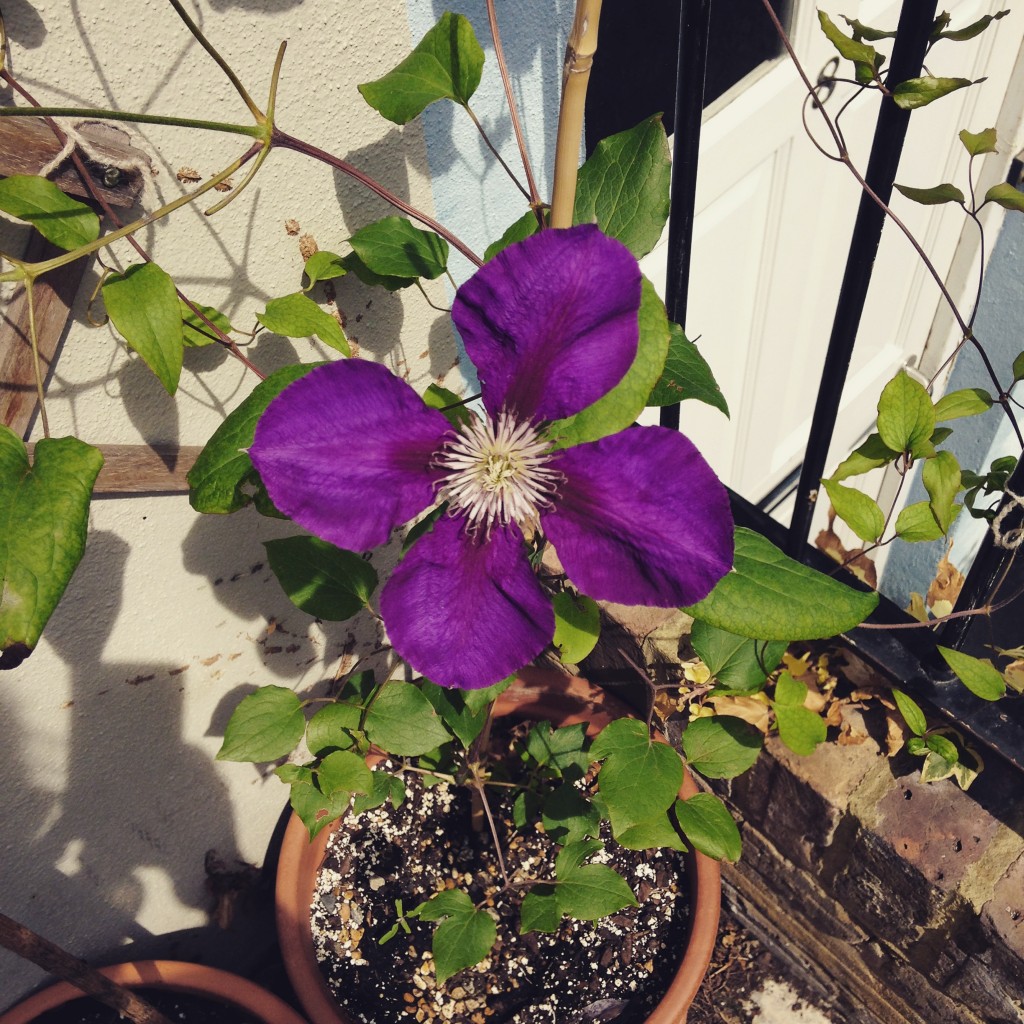 As I’ve had mixed success in germinating flowers from seed, I’ve also concluded that for some additions, it is not cheating to buy plants rather than seed, particularly with perennials where a little goes a long way!

Over the years I’ve scavenged and found ways of making do, tweaked planting times and positions to minimise the risk of frost and pests, used an old glass window as an ad hoc cold frame, made climbing frames and staking out of twigs, chicken wire, yarn… Some things, like companion planting and the glass pane, have worked better than others, like my makeshift pea supports.

With experience I’ve definitely learnt where I can cut corners and improvise but also that sometimes it just makes sense to spend a few pounds on pea netting and fleece to give plants a helping hand, stretch the season or minimise losses due to carrot fly or frost. This year, I’ve even “splurged” on some nematodes to tackle the legions of voracious slugs.

As I have got to know my garden and discovered its potential with each year, I have increasingly enjoyed spending time in the space, enveloped by plants, happy bees, my friendly robin redbreast… I still see the grounds as an extension of the pantry and soil fertility, crop rotation, pest management remain at the heart of operations here, but I also increasingly want the space to be a beautiful garden rather than an allotment plot.

Despite the limited light in certain sections, I brought a “lot” more space into production last year by drawing the planting in around the table with pots of herbs, trugs of beans and containers planted up with shade loving species. I also softened the edges of the raised beds with pots of cottage flowers, like old-school pinks, winter flowering violas, aquilegias… Whilst far from perfect, it was a success. We enjoyed the contented sound of bees scurrying from plant to plant as we sipped aperitifs of an evening. And Mr M regularly commented on how he liked the addition of the little, unassuming flowers! 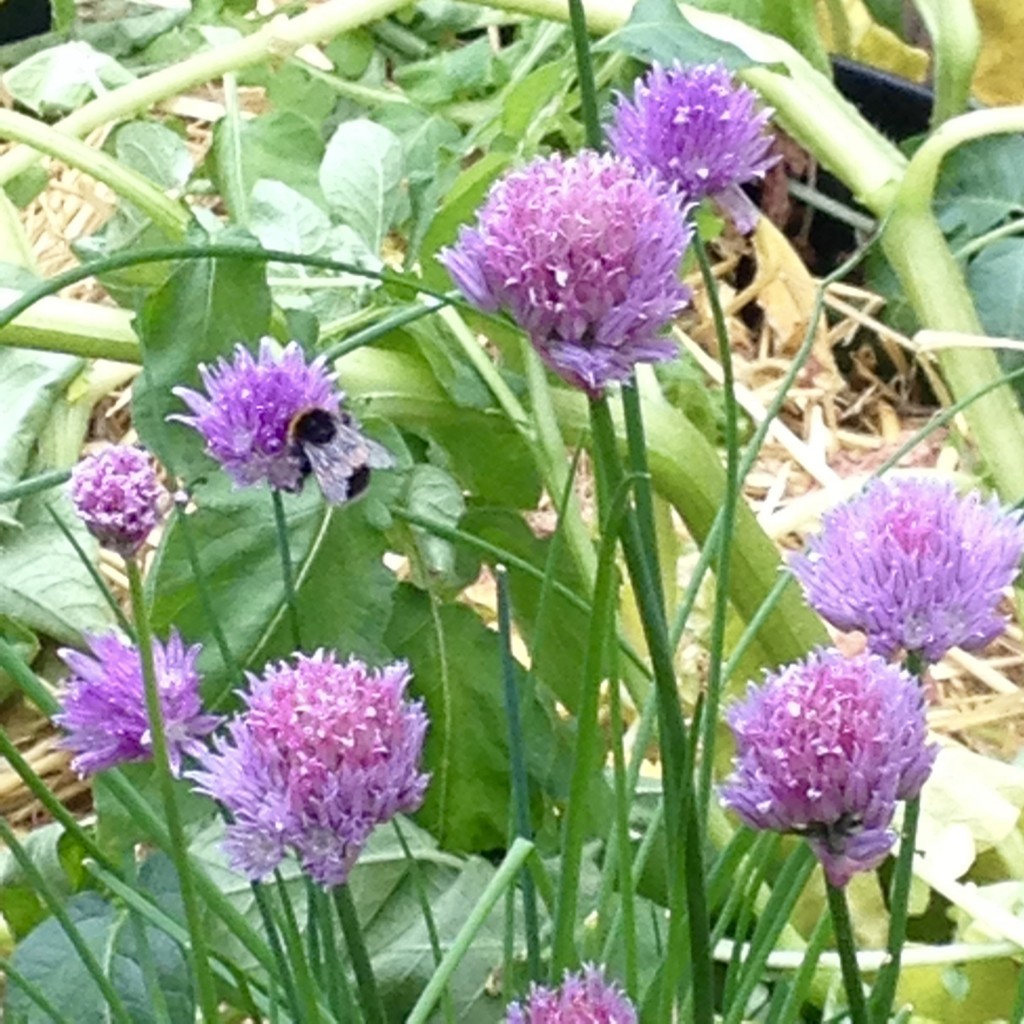 To add to the sense of garden I’ve made space for two small fruit trees. As trees take time to establish themselves, they are a commitment to the place, a way of adding permanence and progression to a space that was once an annual veg plot. Also, spring blossom lifts the spirit after months of dank grey days! 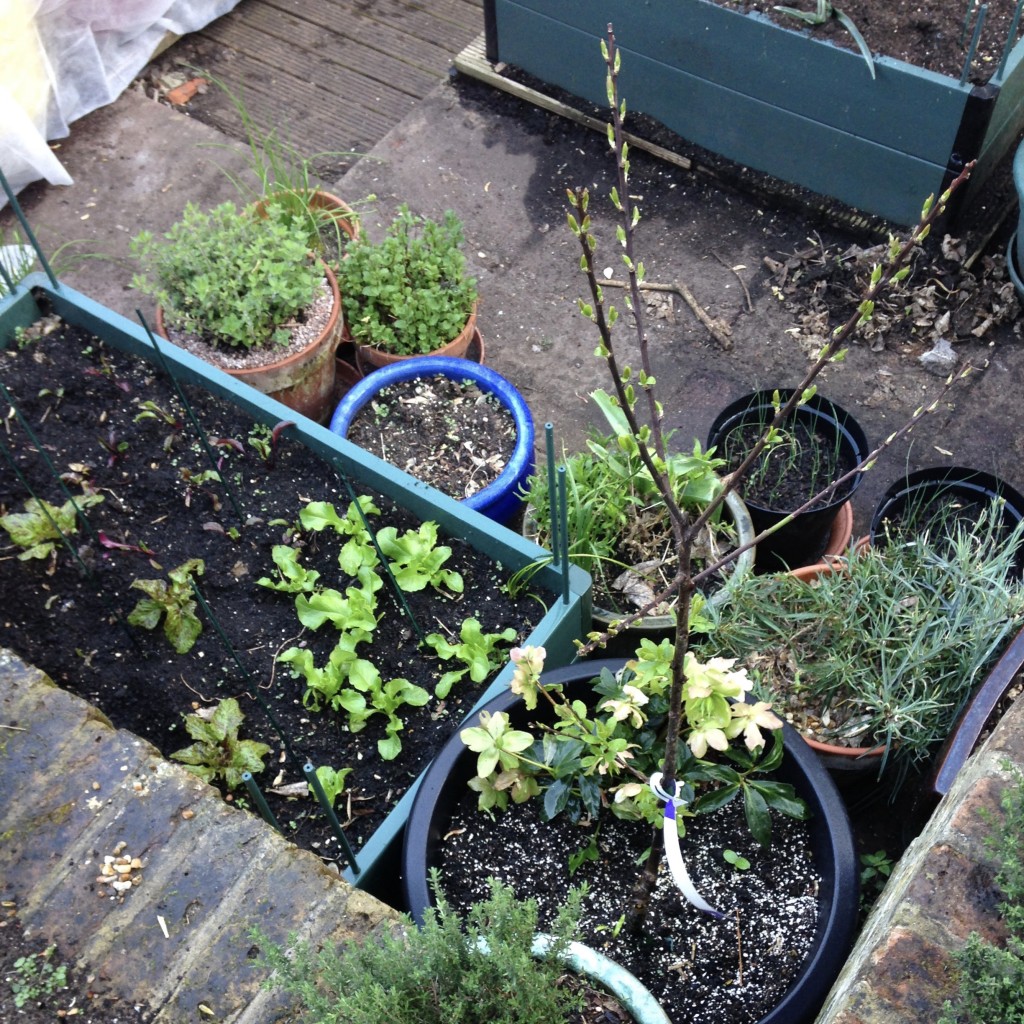 Recently I heard a leading celebrity gardener comment that edibles, flowers, wildlife and a beautiful space was asking a lot from a tiny garden and that perhaps a beautiful space for the family was enough. It was probably a throwaway comment but it made my heart sink. Why the lack of ambition…? With time, patience and effort it is possible to build up the resources, be it experience, soil fertility, a collection of pots and plants, a propagation system…, that turn a tiny space into a delightful evolving garden full of beauty, food, wildlife and joy!

The issue of cost

The media would have us believe that you have to throw money at making a garden. Yes, hard landscaping and running water cost! Apart from rebuilding the back wall, which was about to fall down, and replacing a rotten decked path, we’ve done none of that. Not so much for reasons of cost but because, to my mind, plants are the essence of a garden… and much cheaper.

Seeds are the most economic option but plants can be bought at various stages of their development to keep costs down. For example, plug plants (approx. the size of a stubby pencil) are a lot cheaper than fully grown ones. And bare root roses, fruit trees and bushes bought in winter while dormant are cheaper than a pot of the same plant bought in spring or summer.

Seed saving and allowing plants to self seed mean free plants in successive years, although the successors may not always be exactly the same (or come true, in horticultural speak). Propagating plants from cuttings is a handy way to make more perennials. Over the years I’ve learnt to create multiple plants by taking cuttings of thyme, rosemary, lavender and Verbena bonariensis and it’s hard to describe the excitement of seeing a cutting put on new growth – a sign that they have developed roots!

Local seed swaps and plant fairs are another cheap ways of accessing plants. Even if you have nothing to swap in your first year, a small donation will get you some starter seeds, advice and probably some new friends too.

Finally, you don’t have to do or acquire everything in year one!