On celebrities and those worth celebrating 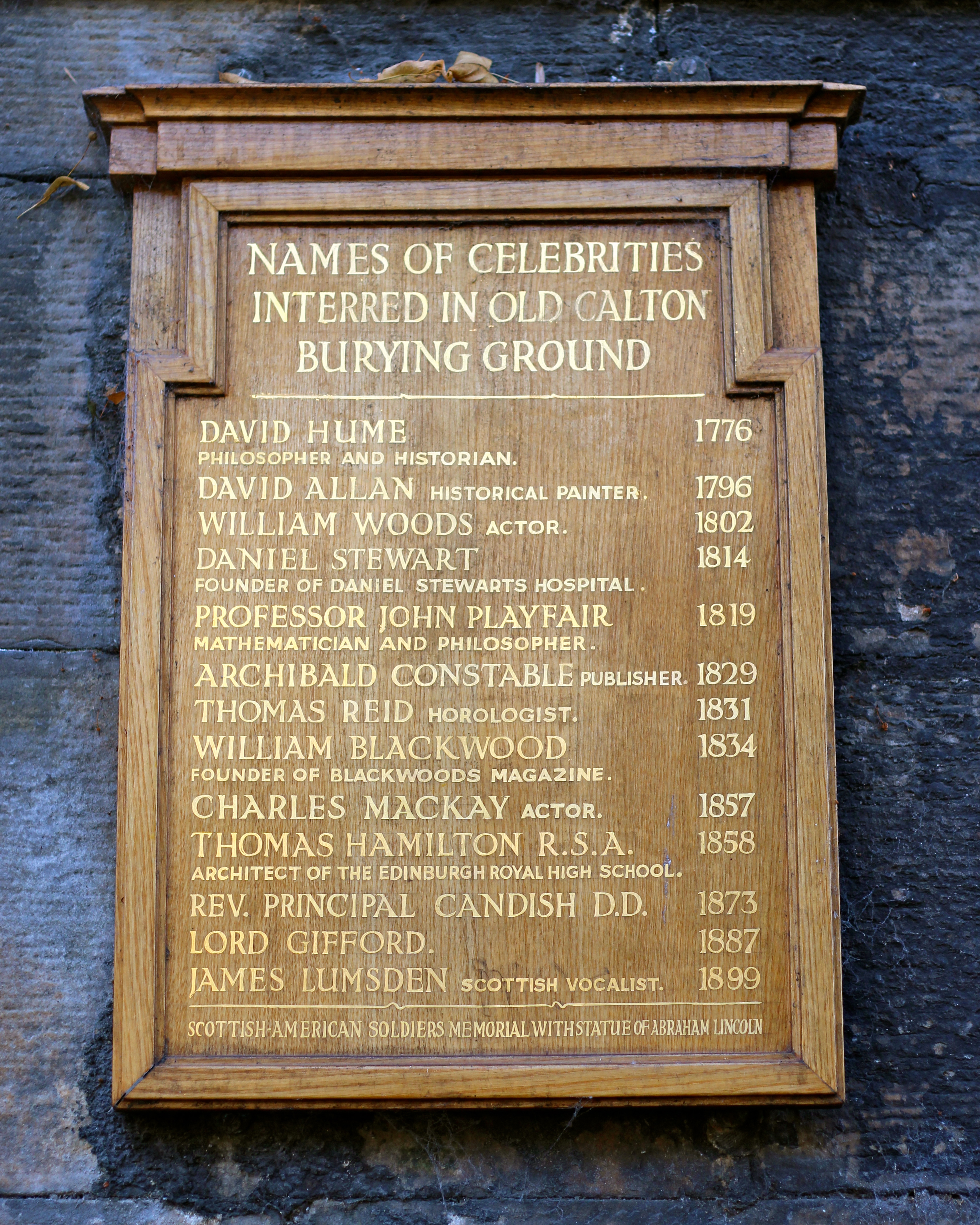 I visited Edinburgh a few months ago and whilst wandering around a plaque on a cemetery wall caught my eye. I’ve always been rather partial to cemeteries, not for any morbid reasons but for what they tell us of past societies’ attitudes, and this plaque was very revealing.

It listed the names of people of note – celebrities to use the then current term – interred in the cemetery. Of course, we still speak of celebrities today but glancing down the names, what a difference! Admittedly the cemetery is the last resting place of a couple of ‘famous’ actors and a vocalist but apart from them, the people of note include philosophers, a mathematician, a founder of a hospital, an architect, publishers… in short people who have contributed to society, science and the world of ideas. How different from the roll call of celebrities that ‘grace’ today’s newspapers and magazines!

I have to admit, I’ve never really understood celebrity culture. I know it’s as old as civilisation itself, e.g. in ancient Greece individuals were lauded (athletes in Sparta, philosophers and playwrights in Athens). Current celebrity culture, however, seems to involve the cult of people who are famous for just being famous; for fronting music or soap operas that are as bland as supermarket bread; for being risqué – in a titillating way rather than an aesthetically, politically or civically challenging way; for who their partner is rather than what they actually do…

I have no problem with people attracting the public spotlight or even using that attention to improve their situation. What irks me is that the media elevate such individuals to demigods and many people seem to aspire to being famous for the sake of the limelight rather than being celebrated for their skills, insights, wisdom, leadership, humanity… It annoys me that ‘celebrity’ is a brand, managed carefully for maximum profile and profit, and that mainstream media, even state funded non-commercial outlets, pander to it rather than call it what it is.

What irritates me most about our celebrity culture, however, is that it leaves little space or inclination in mainstream media to tell of people who are truly worth celebrating. Too few journalists bother to seek out stories of individuals whose acts are really inspiring; who set examples we can all aspire to emulate; who stick their heads above the parapet to be counted but don’t seek adulation. I’m thinking of the inspirational change makers who reinvigorate neighbourhoods; teachers who inspire generations of children; generous carers who tend the sick and elderly with dignity and compassion; the small business owners who balance profit with generating real jobs in a community; campaigners who fight for the unfashionable, forgotten causes…

Looking back, I think my misgivings about celebrity culture were born when I first read Robert Bolt’s A Man for All Seasons, at a far too young age probably, and in particular the quote below. These words are part of a conversation between Thomas More and Richard Rich, whom More advised against becoming a statesman and who would later testify against More in his trial.

Sir Thomas More: Why not be a teacher? You’d be a fine teacher; perhaps a great one.
Richard Rich: If I was, who would know it?
Sir Thomas More: You, your pupils, your friends, God. Not a bad public that.

Even as a child (and without necessarily the reference to God) I grasped that there is more merit in using real skill to inspire a handful of individuals than being known far and wide for actions of little consequence. And I can’t say my views have changed with age!

This post was prompted by recurring discussions I’ve been having about the timidity of certain celebrity gardeners, cooks and other self-proclaimed experts in challenging vested interests. By conversations about how many of us no longer feel we’re being served by mainstream journalists who fail to report on real issues and truly inspiring individuals. And by a joint sense that we do not need to settle for the celebrities we are ‘given’. After all, we, rather than PR departments, should determine whose actions, skills, values, contributions… are worth celebrating!

Please do share examples of real unsung ‘celebrities’ in the comments below.