Of passports, identity and migration

Yesterday I went to the Passport Office to renew my passport. It was a bit of an undertaking as dealings with civil service institutions often are. Frustrating, time consuming, at times Kafkaesque but ultimately a success.

It feels good to have a valid passport again. Due to circumstances, laziness and a dash of vanity, I had been to slow to renew it. The old one lapsed in January so I’ve been without one for five months. It was an odd experience as, growing up abroad, I got my first passport at 12. Unlike my European peers I couldn’t cross European borders on an identity card and as I lived outside my native country, I was de facto travelling and needed one.

This youthful awareness of a passport as a travel document, my life abroad and my subsequent return to the country of my birth and parents have certainly influenced my views on nationality, citizenship and passports. Ones that I have not been able to ignore in light of the events and rhetoric of recent weeks.

A passport is a document to facilitate crossing borders – its original function. Although technically I don’t need it, it is also handy proof of a right to abode, one which was particularly useful when I first moved back to the UK after 20+ years abroad. And in recent years it also functions as photo identification, without which it is impossible to board a plane to elsewhere in the British Isles, open a bank account, instruct an estate agent, solicitor… 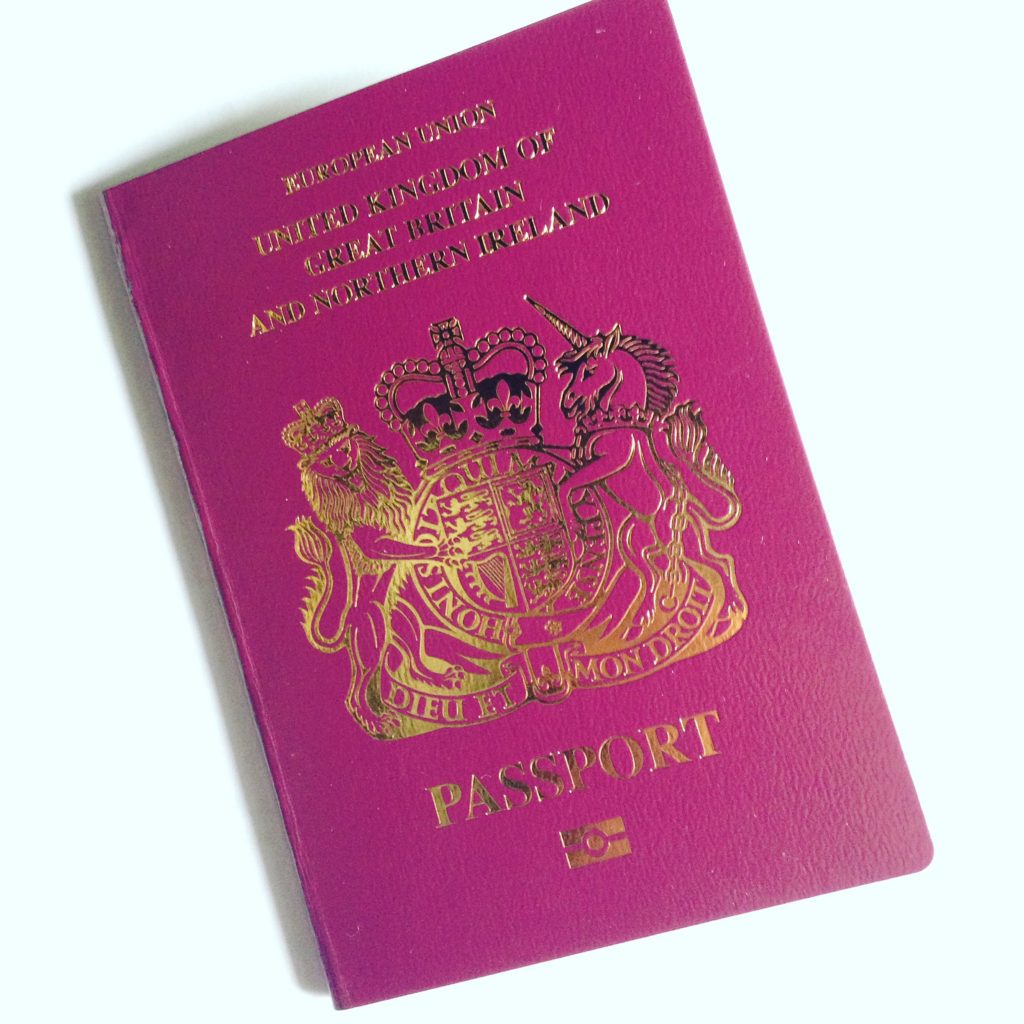 Being part of an island race it is easy to think that we have a freedom to travel but the government can refuse to issue a passport. Such refusal is mainly linked to behaviour (or safety), which underlines that a passport is not a right but a privilege, one that comes with a responsibility. The right to enter another country implies the obligation to do so peaceably, complying with the laws of the land, generally acting with civility and not harming the reputation of your home nation, something a handful of English football fans have once again forgotten. And of course, as and when we return, to do so peaceably too.

Whilst for some a passport is a symbolic representation of Britain, for me the 32-page document barely begins to cover the complex, multi-faceted nature of my country. A state with its flaws and numerous inglorious episodes in its colonial past to be sure, but also a mongrel state that has been shaped into an interesting living entity thanks to the multitude of different ethnic and linguistic groups that have lived within its borders and have sailed to and from these shores.

Celts, Anglo Saxons and later Norse and Dane raiders and settlers; Norman soldiers and administrators; Huegenot refugees; various waves of Jewish and Irish immigrants; the first Indian and Chinese settlers with the the expansion of trade routes in the 18th and 19th century; Polish, Italians and Germans arriving before and during the Second World War; West Indians, the first of whom arrived on the MV Empire Windrush, 58 years ago today; a fascinating mix of Asian communities from Ugandans to Bangladeshi; Cypriots; more recently Poles, Czech… Not to mention artists, academics, sportsmen, writers, designers, chefs, doctors… from all manner of countries.

Although down the ages coexistence between established groups and migrants has been troubled at times, the diverse nature of the people absorbed into what we call Britain has influenced everything from the names of our streets and towns to the food we eat; from the homes we live in to the skills and industries that built the nation’s economic power; from the survival of our transport network and NHS, often dependent on first, second and third generation incomers to many of our seasonal crops, which would rot in the field without seasonal pickers from the EU; from the music we like to the sportsmen and women we admire…

And that’s before we mention the generations of people who have travelled from these shores, who were inspired by what they saw, either returning with their experiences and insights or settling abroad to influence a new local society, and through their migration, embed British family and friends in a wider world.

There are the plant hunters, whose curiosity, influenced our British back gardens – anybody with a pot of geraniums on the windowsill is witnessing the legacy of a migratory instinct. And how many Brits don’t have uncles or aunts in Australia or New Zealand, who left war-ravaged Britain as Ten Pound Poms; or cousins in Canada, the US, Holland, Germany… whose parents, like mine, left in the Seventies when British engineering was in the doldrums. And then there’s the spaghetti bolognese, tzatziki, tapas, wine… all standard features of British eating culture that we embraced as we started to travel to Europe on package holidays. Not to mention the experiences students soak up on gap years, often (part) funded by the European Erasmus and Socrates programmes; or the ease with which we dart off on a city break for a stag weekend, a football match, some mid-winter sun… Whether we settle or just visit, migration is a human instinct.

In Britain we are on the eve of a referendum about our future in the European Union, probably one of the most important polls in my lifetime. This poll should be about what we want our society to be and what positive contribution we want to make to the world. Instead it has descended into a divisive campaign, full of lacklustre statements by some politicians and blatant lies and ugly demagoguery by others. 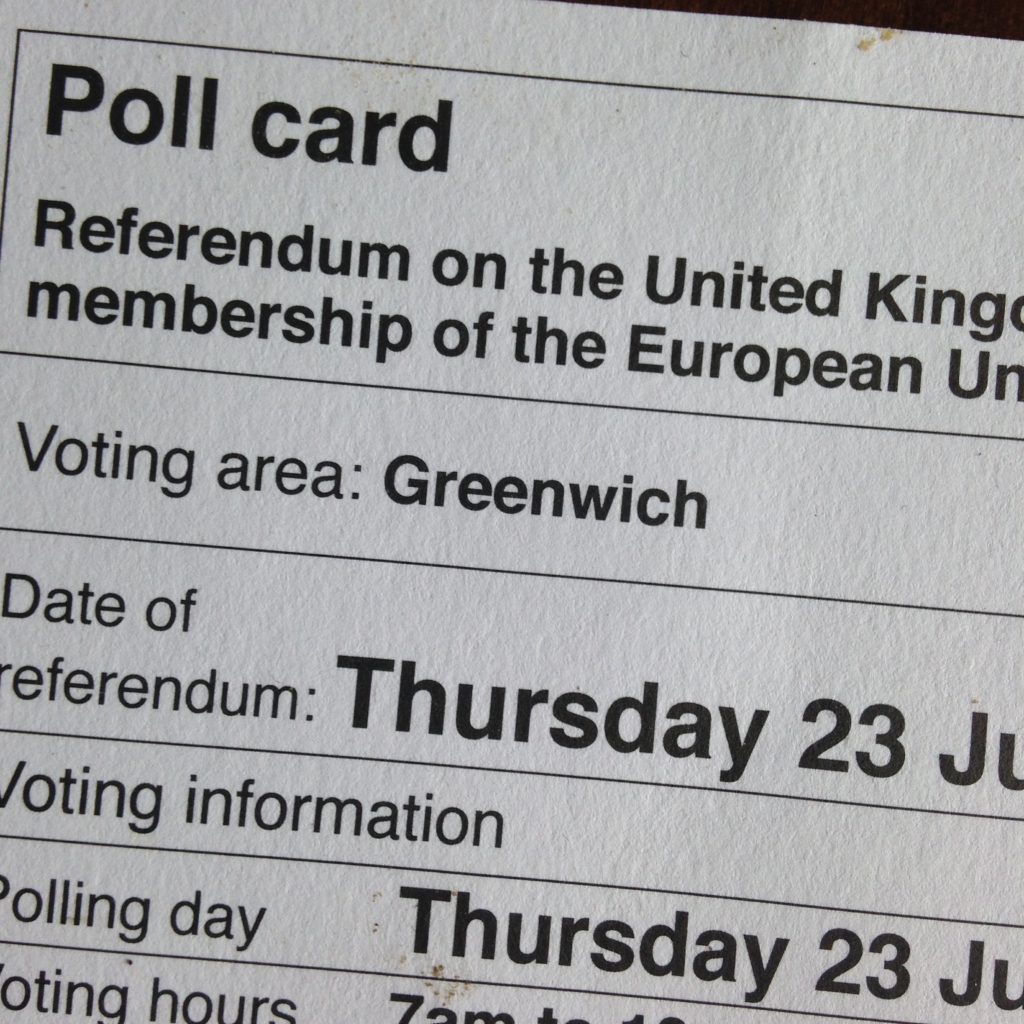 Probably the most important poll of my life

As a politically and economically literate person, I am not convinced by any of the arguments of the Leave campaign. Whilst the EU is far from perfect, with flaws in its political process, an unwieldy civil service and economic imbalance between regions, the same can be said about Britain with an unelected upper chamber, Kafkaesque inefficiencies in our civil service and destructive economic polarisation between rich and poor as well as between London/the South East and the rest of Britain. And for all its failings, it has delivered decades of peace in a continent that has been marked by centuries of wars; it has delivered employment rights, anti-discrimination rights, product safety rules that limit harmful ingredients in our food chain, access rules for the disabled, environmental protection…

Aside from the many benefits of EU membership that have been ignored and under-celebrated during campaigning, I am most disturbed by the xenophobia and bigotry underlying much of the campaign to Leave and the abuse of images and data to fuel a fear of others, erode our ability to empathise and further dismantle our belief in society.

So, whilst I may be pleased to be clutching my new passport after running the gauntlet of the Passport Office’s queues, I will be much happier if I wake on Friday to discover my compatriots have honoured our rich tradition of migration, openness and active engagement by voting REMAIN for a diverse and stronger Britain.

As voting is a civic act that is about more than the individual, tomorrow I will cast my vote not just for myself but for my niece, nephew and friends’ children, for people my brothers and other Brits living in the European Union who will be affected by the outcome of this referendum (and who in many cases are not entitled to vote), and for my many European friends and acquaintances in this country who will likewise be affected by a referendum they cannot vote in. No need to mention you all, you know who you are!