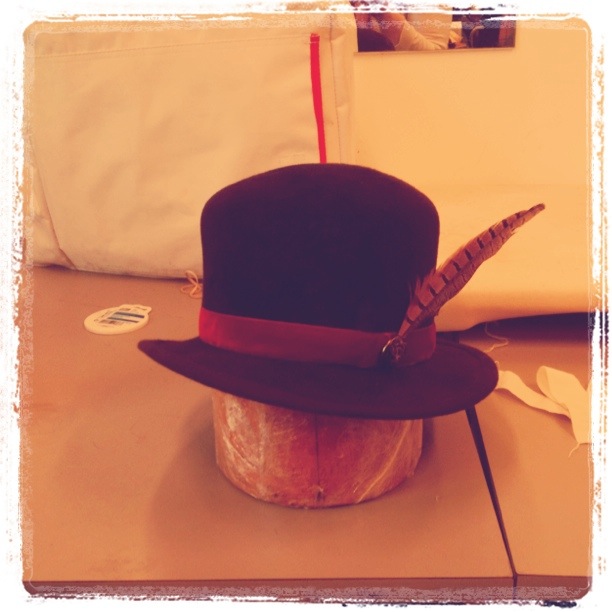 I love hats. I have always loved hats: the aesthetics of hats, the vocabulary of hats, the quirky sense of humour of hats. Headpieces appeal to me for all these reasons, as well as their impact on posture and social graces, both mine and those of my interlocutors.

My favourite styles are cloches, trilbies and berets. Generally the look of the twenties through to the forties float my boat. My interest starts to wane when we hit the tall pillboxes of the fifties and sixties. These look perfect on a petite frame, like Audrey Hepburn, but in general, a built-up pillbox does not flatter an hourglass or pear-shaped English woman. A decade on and there is the ubiquitous large floppy hippy sun hats of the seventies. Whilst useful during two or three summer months, these do not in my book reach the elegant heights of the hats of previous decades. And by the eighties as shoulder pads were on the rise, hats had all but disappeared. I am, however, glad to say that hats seem to have made a bit of comeback and the early twentieth century styles are de rigueur once again. Finally, I am cool, at least from a millinery perspective.

My love of hats is however much more than an aesthetic quest. It has become a sartorial mission, has found its way into my sabbatical plans and is even bouncing around my mind as I consider alternative portfolio career options.

In the United Kingdom hats are generally limited to weddings and Ascot; in Paris they feature even less in the city scape. When my mother was a child, men and women wore hats as a matter of course until the swinging sixties, the increase in personal motor cars and the anything-goes-culture signalled the death of the universal wearing of hats. Mr M and I, however, both remain hat devotees and continue to sport a hat about town and in the country whenever possible. My love of this accessory goes further than being a passive consumer of hats: I am on a mission to bring back routine wearing of hats and I am starting in the atelier!

As indicated in On endings, beginnings and interludes, I have just started a four-month sabbatical to catch my breath, take care of my health and “play”. Whereas colleagues and peers typically plan far-flung travels for such periods, I reached for the adult education prospectuses and started my time off with a week-long millinery course at the London College of Fashion, much to the delight and amusement of my friends, some of whom have proffered their head size.

Thrifty top: a percher beret made with an off-cut of cone, a feather and a mother of pearl button

I spent a delightful week blocking felt and straw into shapes that would grace a black-and-white film or a big race gathering, fixing wire into brims with tiny elf-like stitches and giving free reign to my imaginations with trimmings. Apart from making several hats and learning that I am perfectly capable of making cloches with better finishes than those I buy on the high street, I particularly enjoyed the physical and mental break from work that this course offered. Just like welding, millinery requires you to go slow. You cannot rush the process, and you would not want to: the process is as enjoyable as the end product. Moulding felt to the masterly crafted blocks and waiting for it to dry gives you all the time in the world to attach headbands and petersham ribbon with minute invisible stitches.

The week of millinery also reenforced how much I thrive on making beautiful things and has definitely fuelled an idea I have been toying with in abstract and jesting about with friends when discussing my aspirational portfolio career. It would require a lot more hands-on practice – and to this end I have signed up to the follow-on course in July – but how much fun would it be to turn my mission of bringing hat wearing back to the streets of London and Paris into a practical sideline. How I would love to make hand-made hats accessible to extraordinary “ordinary” women like my girlfriends who have the personality to carry off an accessory that literally makes heads turn. How wonderful it would be to be instrumental in causing heads to turn at the sight of a woman confidently walking tall and marching to the beat of her own drum!

Tagged as: Arts and crafts, Playing