Hap making: a source of comfort and perspective 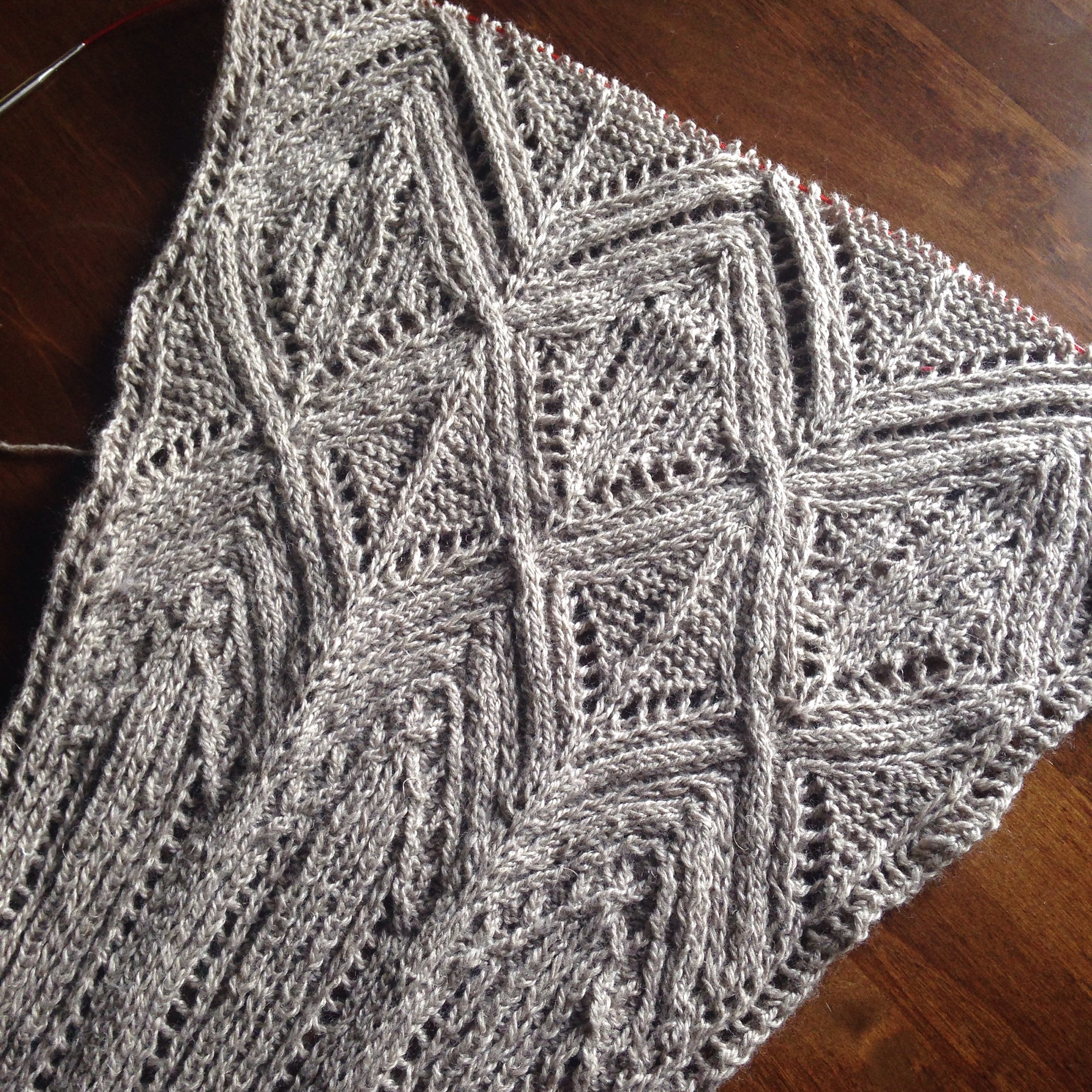 Three months ago many of my compatriots voted to leave the European Union. What followed has not been pretty. Flare-ups of racially motivated abuse and violence; a Whitehall farce with in-fighting in parties, bully boy shenanigans and general disarray about what to do next; pressures on small businesses with costs rising as the pound tumbled; and lots of worry for friends whose life will be affected by Brexit.

For me, like many who voted Remain, there has been sadness, frustration and anger. In the days after 24 June the instinct was to take to the barricades and support civil society organisations for the fight for labour, health, environmental, social… protections that are rooted in EU legislation. But with a political vacuum, it was unclear where to direct that energy. I was also tempted to scream more vehemently than is my nature, but the last thing society needed was more uncontrolled anger. And as my energy reserves are in deficit that was not going to help me either. So instead, I shored up my defences. I sought out silence, I watched for constructive opportunities and I found comfort in my own instinct to create rather than destroy.

One project brought me particular comfort and calm: Uncia, a lace shawl inspired by the fan vaulting of a late Gothic cathedral, designed by the very talented Lucy Hague.*

As the lace is more intricate than anything I have made before (and knitted on both sides), this shawl required concentration. With such focus my brain slowed down, figured out how the combinations of rows and stitches played together and marvelled at how this engineering drew shapes and embellishments.

Having spent much of my childhood summer holidays visiting old cathedrals (they made for cheaper days out than visits to stately homes!), I love soaring pillars, fan vaulting and expansive stained glass windows. As my Uncia shawl knit up, its unusual shape, the mix of perpendiculars and fans, the cartouches of garter stitches… were comfortably familiar. 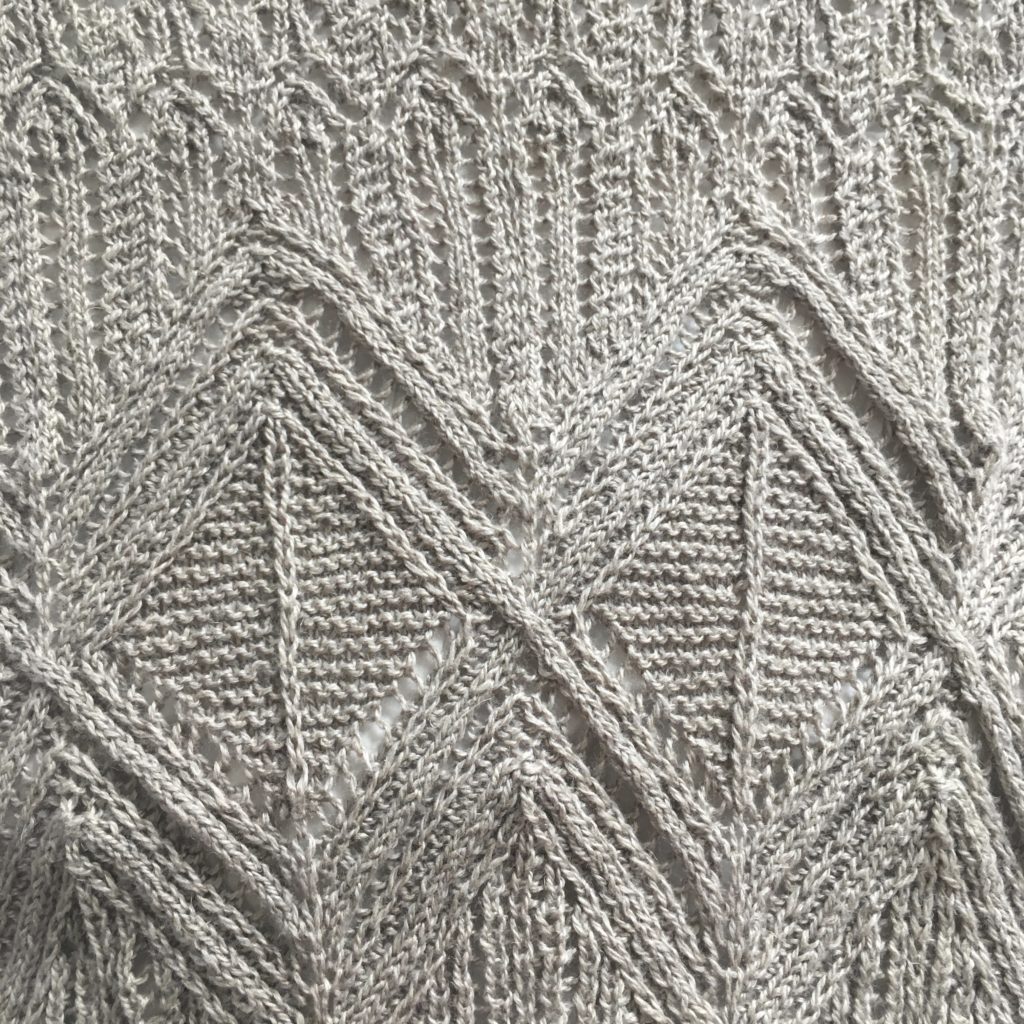 The yarn I used, a British wool/linen mix from Blacker Yarns**, added to the sense of familiarity. The stone colour was similar to the limestone used in many Gothic cathedrals in France and southern Britain but the associations went deeper. The linen adds a coarseness to the material that softens with use. As the yarn ran through my fingers, I could feel the mix of roughly hewn and highly polished stone of cathedrals visited in my childhood. Linen also catches the light differently to wool adding a glistening lustre to the material, which reminded me of the thin film of damp on the walls of medieval churches. Whilst I normally detest damp in all its forms, I find the cool damp of ancient churches viscerally comforting. It triggers a connection with the generations of people who have sat in the same aisles down the centuries and reminds me that for all our differences, many of our hopes, fears and concerns are very similar.

As stitches and rows shaped themselves into a lace fan vault, I wondered what the stonemasons who built the Gothic cathedrals and lived with the upheavals of the Hundred Years War would make of all this? An ordinary person having the luxury of time and money to knit a thing of beauty and wax lyrical about the process and materials that go into it. Small mobs turning on incomers. Confusion amongst the powers-that-be due to arrogance and a lack of planning. A nation turning its back on an experiment that, no matter how flawed, has meant 70 years of peace and stability in most of Europe… 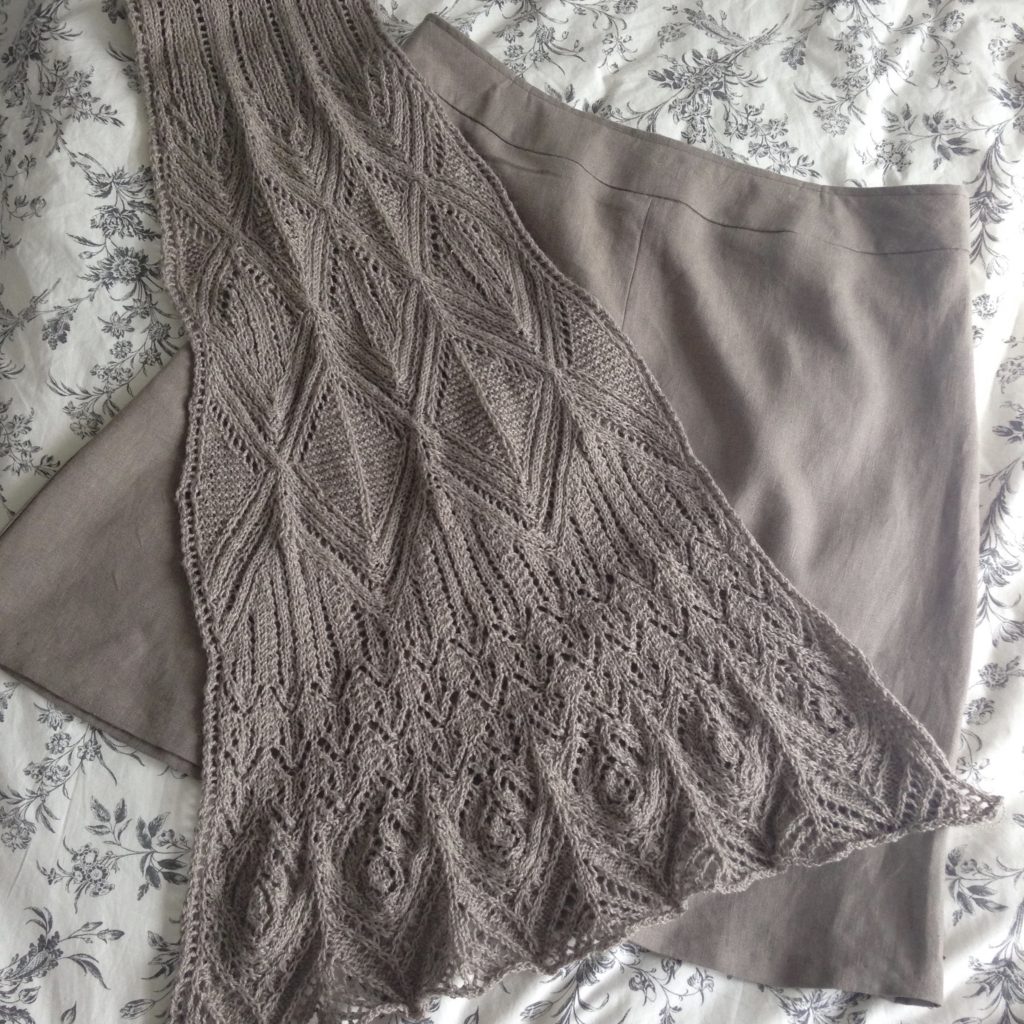 * This pattern is taken from The Book of Haps (edited by Kate Davies), which explores the history of this simple everyday shawl and its vibrant future.

** Blacker Yarns is an independent wool company that works with the Natural Fibre Company, a small mill in south west England, to champion British wool. It works closely with farmers to add value to the the remarkable fleeces available in the UK by producing quality knitting yarn. As a small business, it is financed from a variety of traditional sources but has also benefitted from some public funding, including some support from EU funds and programmes.