It started with a minute – Discovering the joy of running 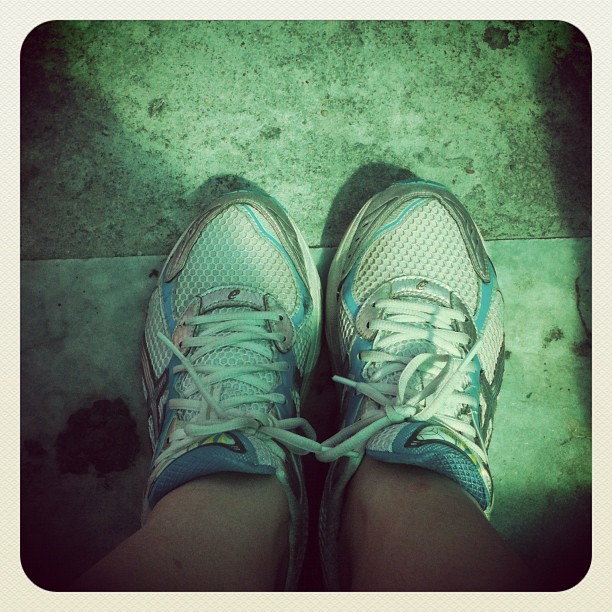 Having settled back into life in London, with the luxury of being a full-time student and wife, I look much healthier. The (relative) lack of stress and almost total abstinence from coffee show on my face, as do the sunshine and fresh air I experience daily. Despite this general sense of wellbeing, about a month ago I had to admit to myself that whilst gardening and pottering around town on my iron steed give me a rosy glow, they would not really improve my fitness nor shed the excess pounds. What I needed was a serious, regular cardiovascular workout.

My heart hardly leapt at this realisation! I have never really enjoyed vigorous exercise, lycra and perspiration. Okay, there were a couple of years, about a decade ago, when I notched up some 10K races, half a dozen triathlons and even a marathon, but that was an aberration. My preferred state is a sedate pace, a pretty frock, a cup of tea and a book! However, unable to squeeze into half my skirts and with “40” looming on the not too distant horizon, I accepted I needed to take myself in hand.

The furtive route of then

Ten years ago, when I ventured to get fit, I pitched up at the municipal gym, feeling like a fraud. I told nobody, not even my then boyfriend. Wearing an old teeshirt and leggings, I found a treadmill tucked away in the far corner, warmed up with a walk and ran for all of five minutes. Two days later, I paid my entrance fee and struggled on for seven minutes, checking over my shoulder that nobody had rumbled me.

The next weekend I shuffled into a sports shop and blushing with embarrassment bought a sports bra and ‘structured shoes’ from willowy girl who was barely out of school.

Armed with those purchases, my clandestine gym visits continued and in the months that followed I clawed my way up to running 30 minutes on a treadmill set to the smallest incline possible. This running was painful enough, no need to add a hill for good measure!

After a few more months, I met another beginner and we started to run outside, picking a route that was as flat as a pancake. As my fitness grew, I confessed my running efforts, completed a few races, set my sights on the Great North Run and then a marathon. For two years I was a runner.

And then, health problems, a car crash, work and life in general took over and my running came to a shuddering halt. The fitness dissipated and the pounds piled on. There were a few efforts to regain my fitness but I never really emerged from the shadowy corners of the gym again. At the time I put it down to other priorities, but if truth were told, the knowledge of the fitness gained and lost paralysed me. Until just over a month ago…

With a string of injuries behind me and unwilling to join a gym due to the carbon footprint of such leisure domes, I went back to basics. I downloaded the NHS’ Coach to 5K programme, pulled on the technical fibres I wear for yoga, laced up my Asics and strode out.

During my first week, I alternated 60 seconds of running and minutes of walking. As I realised to my amazed delight that I could run for a whole 60 seconds with relative comfort, I did not avoid the picturesque but steep Hyde Vale or Point Hill or the long steady incline up The Avenue. When the voice on the iPod congratulated me for running a total of eight minutes there was a wry smile. A far cry from 26.2 miles but as I am no longer the person I was a decade ago in many ways, I just gave myself a little metaphorical pat on the back.

Week two arrived and I was mixing 90 seconds of running with two of walking. Midway through my second run of the week, something in my body remembered how comfortable running feels once I am through the torturous warm-up. Suddenly I longed to run but I held back until the end of the penultimate 90 seconds. When the voice told me to slow to a walk before the final run, my body felt great so I kept going through the two minutes’ recovery time and the last 90-seconds run of the day. I felt triumphant! I had run a whole five minutes and it was as far removed from the clandestine five minutes on the treadmill ten years ago…

Since my body has realised that it can run and wants to, I have fitted in three runs a week, looking forward to each one. I still use the NHS programme to get me through the warm-up to the point where my body wants to move and stretch itself a little more. I have passed the mythical 30-minutes mark. I still run incredibly slowly, with children on roller skates and mums with their strollers overtaking me, but I am loving every minute of it.

The long slow incline of The Avenue; hitting my stride at an explosion of colour; “Rhododendron Dip” – where I could stop but choose to carry on; the alpine garden – discovered the day I broke 30 minutes (clockwise from top left)

In the past month, as spring has marched through Greenwich Park turning buds into blooms, I have seen my stamina and fitness improve. There is no hiding in corners, out of sight from real runners. Fit regular athletes pass with an acknowledging nod and in turn I smile encouragingly at fellow tentative beginners. The strip lighting and air conditioning of ten years ago are a distant memory as my skins soaks up the dappled sunlight through the trees and my face laps up the cooling breezes off the Heath.

And most of all, my body enjoys having the time, space and freedom to hear itself. To recognise when it can push through the next challenge and when it needs to hold back; when it wants to move at a steady pace to absorb the colour and fragrance of its surroundings; or when it simply wants to bask in the joy of running.

To celebrate my discovery of the joy of running, I am taking part in a 5K Race for Life charity run in aid of Cancer Research UK on 1 July. If you would like to show your support by sponsoring me, I should be very grateful. You can make a donation by clicking here. If you prefer to show support with a donation to another good cause of your choice, please feel free to do so and let me know by leaving a comment.