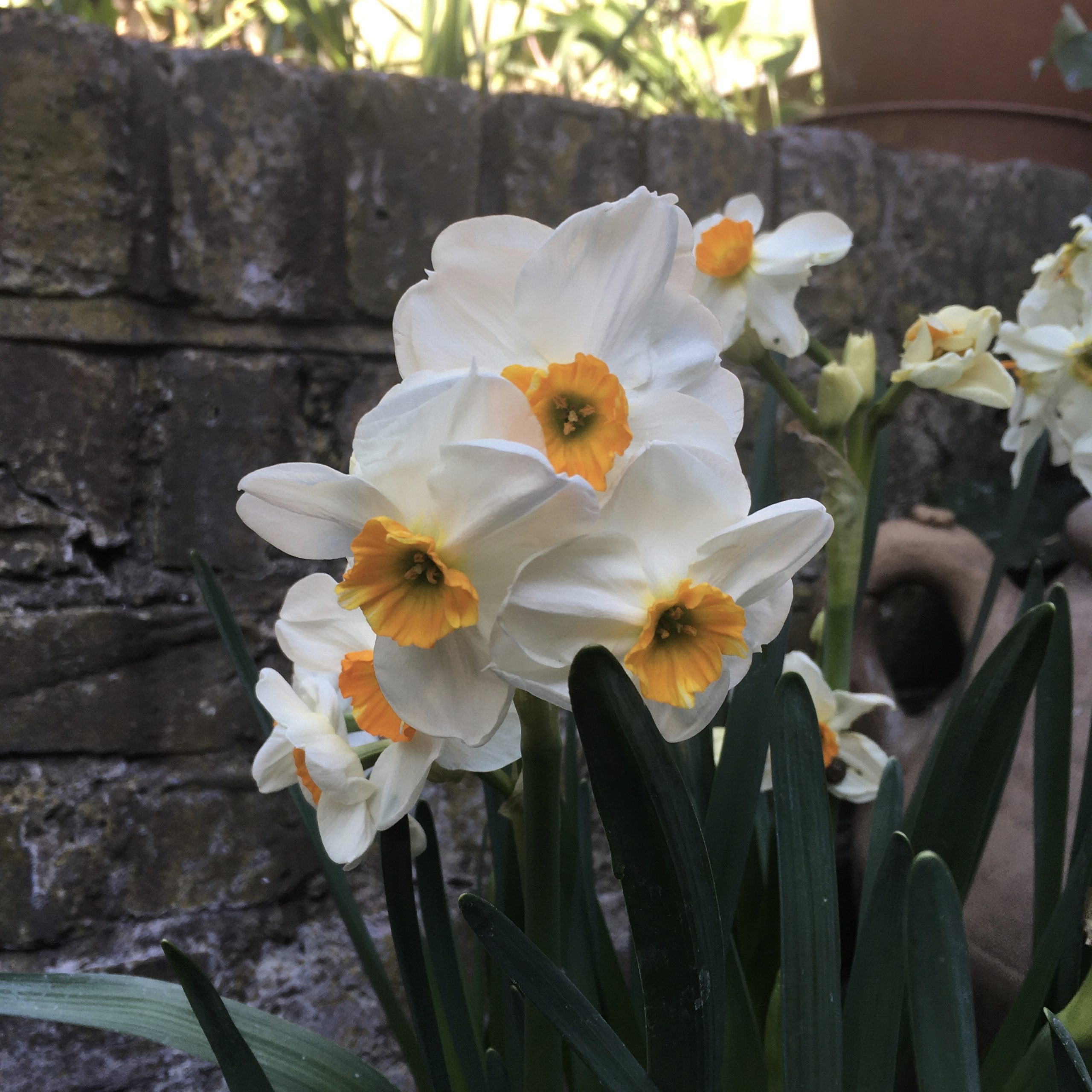 Our small patio garden has been my happy place since we moved here, and even more so since I developed fibromyalgia and my world shrunk. As lockdown measures have kicked in due to COVID-19 and access to the outside world has contracted even further, my funny little garden space has become even more important. Although tiny, there is an endless mix of familiar old friends and new discoveries in this patio garden and the arrival of spring means there are new signs of life every time I step outdoors.

At the start of the month Mr M and I tackled the big task of digging out the compost heap and mulching as many of our raised beds as possible. The reason was twofold. As well as putting some heart back into the soil, we wanted to move the ugly Dalek-like compost bin away from our seating area and devote the spot to a small apple tree. It was a backbreaking job but rather enjoyable in a bizarre way.

Compost really is one of those miracles of nature. Pile up a load of organic matter, preferably a mix of green nitrogen rich waste (like vegetable scraps) and brown carbon rich matter (like twiggy prunings) and wait for it to decay, with the help of slender ruddy compost worms. You would think the result would be a sloppy smelling mess but what you actually end up with is a rich, clean smelling crumbly mass of soil. And to think some people refer to it as dirt!

Another job was to cut back the dead and straggly leaves on the ferns. As whole sections of our garden are quite shady, we have a number of ferns dotted around in pots. These plants are great for softening the edges as well as magnificent living relics of an ancient world. The evergreen Asplenium scolospendrium (heart’s tongue fern) and Blechnum spicant (deer fern) weren’t looking too bad. The deciduous Dryopteris felixmas (commonly known as wood fern) on the other hand were looking a bit sorry for themselves.

One of these ferns had seriously outgrown its pot so back in March Mr M and I prised it out of its container and cut it in two. There is nothing delicate about taking a garden fork and spade to a fern root ball and slicing it vertically. It was a tough two person job and because we needed to be heavy handed to cut through the fibrous mass, I was worried that the ferns wouldn’t survive. For weeks I would look wistfully at two stumpy brown fern clumps, fretting I had killed them. But this group of plants would not have survived for millennia if they weren’t tough and a couple of weeks ago I spotted the first new fronds unfurl themselves…

April also involved lots of seed sowing. Most of the seed sowing action is still happening inside, with the planting out of a few very hardy seedlings, like Calendula officinalis or pot marigold, a fabulous all-round flower for any vegetable patch-cum-cottage garden. But as the clocks changed and daylight hours increased, I sowed a few rows of Kyoto green bunching onions, d’Eysines carrot (a fast-growing short rooted variety), common sorrel (Rumex acetosa) and beetroots. I also squeezed in a patch of peas that I’m growing close together for pea shoots rather than for their pods later in the year. Although fresh peas are delicious, you don’t get much of a yield per square foot so on the whole it makes more sense for me to grow them from their flavoursome tips.

When sowing seeds directly into the soil, I also sow in an identifiable pattern, whether neat rows, gentle curves or tear-shape drift as this helps me identify what shoots are intended additions and which are weeds. And sure enough, after about three weeks I started to see the tiny bright green signs of life. There are obviously many challenges (including legions of snugs and hordes of snails) between the early tips of growth and supper on the dinner plate, but watching life emerge is always heart lifting, and all the more so in these strange times.

The real colour display doesn’t happen till later in the year but there has been a small smattering of flowers to lift the mood. The pots of Narcissus geranium are starting to come into their own as the early narcissi and wild garlic start to fade. And the ivory bonnets of the Aquilegia (or columbine) are gently nodding in the breeze. Behind them there are the straight stems with feathery leaves of Nigella damascena (commonly known by the beautiful name of Love-in-a-Mist). And if you look closely you can see buds with a hint of blue, which will burst open into ethereal flowers before long. And over on the herb shelf there are tightly domed mauve buds on the chives, which means Mr M and I will soon be sipping tea or wine outside while we watch bees gorge themselves silly on the nectar of the pompom-like chive flowers.

As the weeks and months roll on I will share more of the growth and decay in our tiny urban cottage garden but for now I will leave you with a little tour of some of the heartening sights in our April garden.